How Can Dogecoin Make You Rich? 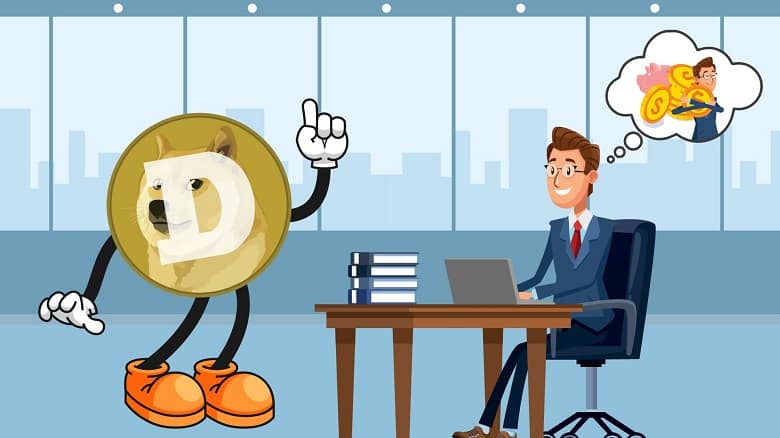 However, Dogecoin is unique in its own way. It has its foundation based on a dog meme which may seem to be very irrelevant for a cryptocurrency, and there lies its uniqueness. The dog meme attracts the attention of investors who often want to take a look at what exactly this coin is and even invests some money to see how the coin works. With this strategy, however foolish it seems to be, Dogecoin has survived for all these years. It attracts the younger generation who have a greater risk-taking appetite.

But how can such a cryptocurrency make you rich, read below to know more?

Can Dogecoin Make You Rich?

Though Dogecoin started as a meme cryptocurrency, its value rose exponentially over the years. Be it for the internet hype or because of Elon Musk’s repeatedly praising Dogecoin over his tweets. He repeatedly posts jokes, memes, and inspirational quotes about Dogecoin to make sure that the trend continues that will ultimately lead to the price surging well above limits. It is just like any other cryptocurrency, and thus it can be traded just like other leading cryptocurrencies.

As of now, it is not available in any of the leading currency exchange platforms, but if this hype continues, the leading exchanges may start considering Dogecoin trading on their platforms, thereby increasing the credibility of the cryptocurrency. More people will be curious to know more about Dogecoin, and thus its price will shoot up. Those who previously backed off from investing will also try to have a look at the coin.

Dogecoin Is Hyped, Which Makes It Volatile

Dogecoin is one of the hyped internet investments that has been trending on social media, where Dogecoin-related accounts gaining quite a lot of followers. But are these hypes worth doing, will it help investors make money? Well, that is quite a debatable question, and investors have different opinions about it.

Some say that a cryptocurrency that is built on a foundation of a dog meme cannot have any value, and it is not worth investing in. However, some others believe that the continuous hype and excitement for this cryptocurrency have gotten into people’s minds, and now more individuals are coming forward to invest in this cryptocurrency. This causes an increase in the price of Dogecoin, which implies more money for the investors when they choose to sell their Dogecoin holdings.

Though it is not that easy to directly trade or purchase Dogecoin like other leading cryptocurrencies, if you have a little more risk-taking ability, putting up a small amount into Dogecoin will not be that a bad idea. All the hype and frenzy about Dogecoin has skyrocketed its value, and those who can hold them till the end will win a lot of money when they sell them. Moreover looking for more information about this, just go through dogecoin prediction today.

In January 2018, Dogecoin had a market cap of around $2bn, which rose to around $5.5bn by the end of January 2021. Thus, if this hype continues and Dogecoin gets stuck into people’s thoughts, the price will continue to rise high.

But it is also true, as you can see in other much-hyped stocks like GME and AMC, hype can only make the price soar high until people begin to potentially see huge losses. So, it ultimately depends on your risk assessment whether you want to go far with the investment or not.

Some Interesting Facts About Dogecoin

The cryptocurrency has never failed to amaze crypto users and there are some very interesting facts about Dogecoin.

1) The main asset of Dogecoin that is the reason for its survival is its active community behind it that has come forward to fund numerous charitable projects.

2) Dogecoin is an inflationary currency as opposed to other leading cryptocurrencies that are deflationary. In the case of deflationary currencies, once the market cap is reached, it will no longer be profitable for miners to continue mining more coins. Mining more coins beyond the cap lead to either unacceptably high fees or very long transaction times. Therefore, miners are incentivized with new Dogecoins to encourage them to mine more new coins. Moreover, an inflation-based approach was implemented to replace lost coins and keep the crypto at a stable 100 billion coins.

3) Dogecoin is mainly used for tipping internet users for posts that deserve recognition; users tip each other with Dogecoins if they like their posts. It is more a “like” on social media platforms but with more impact.

4) In 2021, Dogecoin prices surged high due to the influx of users chasing GME stocks. It was further boosted when Tesla CEO, Elon Musk began to post cheeky tweets about Dogecoin and praising it as the “next bitcoin.”

5) Dogecoin is based on the basic technology as in Litecoin, and thus LTC miners are also able to mine Dogecoin using POW or Auxiliary Proof of Work.

Thus, on a long-term basis, Dogecoin has been on an upward trend, and the credit should be given to media attention. As more mainstream traders become involved in Dogecoin trading, they can expect the prices to broadly move upward with some slightly rocky periods as in other cryptocurrencies.

History of Ripple – All You Need to Know

Coinbase vs. Gemini: Which is Better?