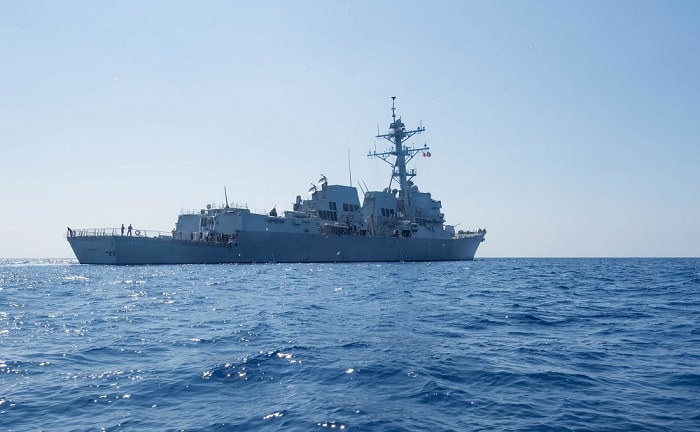 China has been charged with sending around 100 of ships together to block the construction work of Philippines on a controversial Island in the South China Sea.

Beijing began to move vessels to Thitu which is the part of Spratly chain, in compliance to the Asia Maritime Transparency Initiative [AMTI] which is operated by the Washington based Centre for Strategic and International Studies.

The fleet of ships together was sent off alongside Subi Reef which consists of vessels of the Navy and coastguard besides a bundle of fishing boats. The report suggests that their appearance was associated as an effort to force the Philippines to stop the work on the disputed island that China also claims at its property.

While the satellite pictures show that the Chinese navy Jianghu V class frigate and Zhaoduan class coastguard intersected Thitu on December 20, at that time the Chinese vessels had topped to 95.

The report also suggested that the Chinese warship was seven nautical miles away from the Philippine navy’s frigate namely the BRP Ramon Alcaraz during that time.

Back in April 2017, the government of Philippines reported that it was supposed to start constructing a beaching ramp mainly on Thitu, commonly known as Pagasa in the Philippines and Chinese Zhongye Island.

After the completion, the beaching ramp will permit the ships of the Philippines to carry materials in order to repair and to extend the runway over the island so that it can adjust bigger aircraft.

The construction work might have been completed by the end of 2018. Meanwhile, Philippines authorities stated that the process had been delayed due to cold weather and rough seas.

The AMTI indicated that the operations of China have also contributed to the delay over construction.

The Defense Secretary of Philippines Delfin Lorenzana addressed on Monday to the Philippine Daily Inquirer that the ramp is intended to be completed during the quarter 1 of the year.

The only issue with the Pagasa is that everything that is required to repair like steel bars, gravel, sand, and heavy equipment, needs to be brought in, Lorenzana mentioned. “In order to bring all these things we require a beaching ramp, so I hope that it will be completed during the 1st quarter of the year, about the beaching ramp, ” he added.

Lorenzana also mentioned that his country should oppose the decision of Beijing to build a rescue center over the Fiery Cross Reef, basically captured by Chinese outpost in the Spratly chain which is also maintained by Philippines and Vietnam.

The AMTI quoting about the satellite images stated that the number of Chinese ships in that area was increased to 24 on December 3, just before the recent construction work began and had increased to almost 95 on December 25 although the number has reduced to 42 by January 26.

Earlier in November, Lorenzana said that China’s ambassador to the Philippines had requested to cancel the proposed work.

Meanwhile, the decrease in the Chinese vessels indicates that the Chinese forces have decided to settle into monitoring pattern and warning after their large initial deployment process failed to satisfy Manila to stop the construction work, the AMTI stated.

Eventually, the plans have regularly faced delays, and their extent is much simpler as compared to those which were taken by China or Vietnam, the report mentioned.

Upon completion, the Philippines will have re-acquired around 8 acres of land in past years in Spratlys, in comparison to 120 acres by Vietnam and 3,200 by China, it concluded.