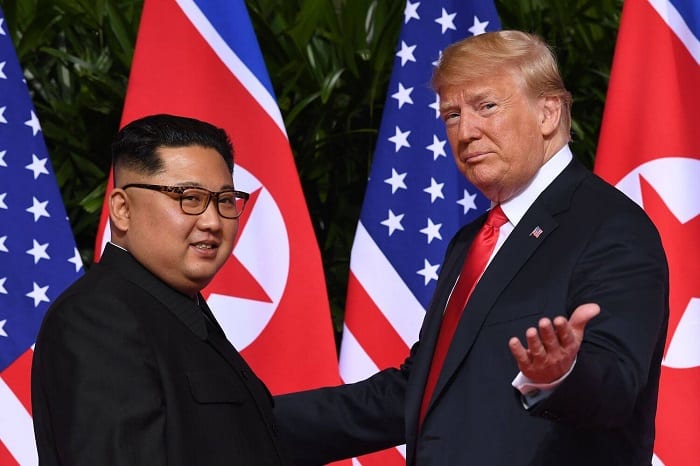 The political and diplomatic relationship between North Korea and the US has been historically spiked. This condition worsened when North Korea conducted a series of missile and nuclear tests and displayed an ability to launch a ballistic missile across its borders. Tension prevailed between both countries in 2017. During the first half of 2018, North Korea announced the restoration of its missiles and had agreed to hold talks with South Korea. An inter- Korean summit was signed in April followed by bi-lateral summit between Trump and Kim in June 2018. This summit called for the “Full denuclearisation of the Korean peninsula.” Ever since the success of the first meeting, US hostages have returned home, nuclear testing has been stopped, and there hasn’t been any nuclear launch in more than 15 months.

US president Donald Trump has announced that there would be another meeting between both the leaders at the end of February 2019, in Vietnam. This meet is to push for peace on the Korean borders. Trump has confirmed that his association with the North Korean leaders has been good so far and there has been a development in his administration’s efforts to stabilize peace.

However, president Trump has confidently claimed that “Washington and Pyongyang would be in a major war right now, had he not been elected as the president of the United States.” He also stated that continuous efforts are required to keep the peace in place as the US has a long history of heightened tension with North Korea.

Trump-Kim’s second phase summit meeting is scheduled on 27thand 28th February, in Vietnam. The exact location for the meet is not confirmed yet. However, two main locations that pose as major possibilities are – the nation’s capital, Hanoi and the coastal resort town, Da Nang. Other countries, South Korea and Japan hope that this summit would be meaningful and would lead to the complete denuclearisation of the Korean peninsula.

Prior to the leaders meet, the US lead negotiator with North Korea- Stephen Biegun is all ready to meet his North Korean counterpart Kim HyokChol on Wednesday in Pyongyang to discuss the content of the meet and the concrete deliverables.

The White House announced that the summit was scheduled at the end of February after president Donald Trump met with the North Korean diplomat – Kim Yong Chol and discussed for an hour and a half at the white house. After the past year’s meet, President Trump confidently declared that North Korea’s supply of nuclear missiles did not pose a threat to the US anymore. North Korea responded similarly, as long as the US does not pose a threat, they will hold back the usage of their nuclear supply. Their demands included the removal of US troops from the South Korean border, which the US hasn’t accepted and termed it non-negotiable.

The second meet is to progress further with respect to the development of nuclear missile, as there hasn’t been any post the first summit in Singapore. Reports state that North Korea has been working in new nuclear missile development projects and production of fuel for the missiles have increased in multiple solitary locations before that summit.

The UN has been keeping an eye on North Korea’s moves with nuclear weapons. They have confirmed that North Korea has been covering their ballistic missiles from American strikes. Monitors also said that the country had been illegally avoiding measures and the penalties.

North Korea has been the only nation to test nuclear missiles in this century. The nation’s leader Kim has been following the steps of his father, Kim Jong II, and grandfather, Kim II Sung and has tested more than 90 missiles and fired four nuclear weapons, since 2011. He has launched these weapons more than his father and grandfather did during their entire tenure of 27 years. The most severe and first ever intercontinental ballistic missile was tested in 2017. Kim has further threatened to release missiles into waters of Guam, touching the US territory before the summit.